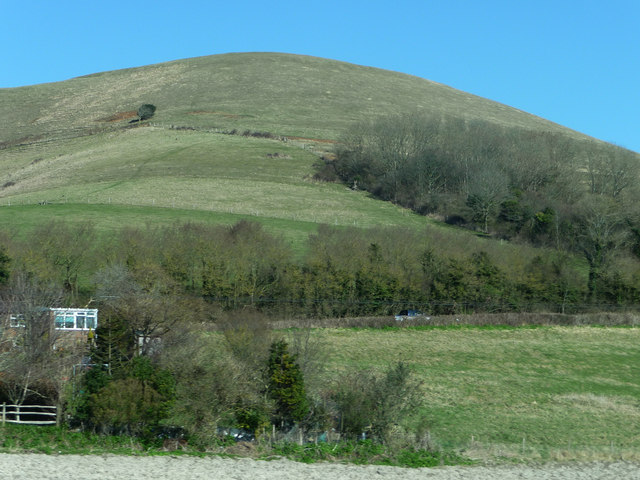 MOUNT Caburn, near Lewes, dominates the river valley below it and is a distinctive local landmark.

At the top of this steep hill, popular with hang gliders, lie the remains of an Iron Age hillfort, but traces of much earlier human activity have also been found.

Archaeologists suggest Neolithic people may have seen the hill as a special place, perhaps even a sacred one (i), an idea which may have carried on into the Iron Age.

The hillfort probably began life around 2,500 years ago as a simple enclosed farming settlement. Later it was fortified with a ditch and an earth rampart and then fortified again in the first century AD, possibly as a response to the Roman invasion of Britain. It seems to have gone out of use after that.

However, pollen discoveries suggest trees at Caburn were being coppiced and pollarded from the beginning of the Neolithic, around 4450 BC. By around 3750 BC, the finding of cereal grains suggests crops were planted in woodland clearings at the base of the hill. About three hundred years later a yew wood was planted. This was maintained for 1400 years. This dark green cap of yews on an already prominent landmark leads archaeologists to suggest that the hill may have had a special significance to Neolithic people in the area.

More than 140 pits have been discovered at Caburn containing a whole host of different objects including iron knives, weaving combs, loom weights and broken quern stones.

Since Caburn does not seem to have been a permanently settled site, it is possible that whatever Iron Age activities took place there, they culminated in the deliberate burial of these objects, perhaps during special rituals. (ii) The purpose of these rituals is not known.

Caburn has been excavated many times, first by Augustus Lane Fox in 1877 and in 1878. The most recent excavation took place in the late nineties.

*You can walk to the Caburn hilfort from Lewes or Glynde.

Video: Spiritual beliefs in Ancient Britain, from the BBC series Britain BC

Enjoy historian Tom Holland’s narrated series of videos, each focusing on a different one of our historic sites and treasures.
Donate now

Join the Sussex Archaeological Society today and enjoy all the benefits we have to offer.
Join now

Help us celebrate 175 years of The Sussex Archaeological Society. We've been hit hard by lockdown but hope to celebrate our next anniversary.
Donate Now

Want to see What's On?

Be the first to hear about our latest events taking place across our six historical sites. Don't miss out and sign up today!
Find out more

Sussex Archaeological Society is actively involved in historical and archaeological research and practice.
Find out more

The Sussex Archaeological Society are very grateful for the support of the our Funders.